Firstly, I apologize that I’ve been remiss on keeping you up to date on the garden! I’ve had quite a bit going on and haven’t been on top of the picture-taking as of late. This is the one thing that has kept me from sharing with you, so now I have some lost time to make up for!

So what have I been up to in the midst of getting my garden going? Well…you know April was a crazy month for me. The first week of May was pretty full as well. Hunter had a guitar concert and a band concert. Saturday was the Home Brew Block Party in my hometown, followed by dinner at a favorite local restaurant, Mary Jane Burgers and Brew. After that came Cinco de Mayo fun on Sunday with the crew, followed by a drive to pick my boys up from their dad’s and bring them home.

Last week I went to see Rent, the musical, at the River Campus with Martha, my friend Alyssa’s mom. Tuesday night I started work on a headboard I needed to have refinished for the weekend so it would be ready for my new bed. It was the first time I’ve put my makeshift paint studio to use in way too long, and it felt really good to tackle a refinishing project! The boys had their last SRE class on Wednesday and I finished up the last coat of paint on the headboard. Then Michael came home from a work trip on Thursday night, so I picked up him and his coworker from Enterprise and got to spend a little time with him.

Friday night was Fiesta Friday at my house – our second friend’s dinner, and the first opportunity for some of my friends to meet Michael, and his son and my boys got to meet each other for the first time. I wondered how that would go since my boys are seven and nine years older than his son, but they all had a blast together and it honestly couldn’t have gone more perfectly. His son has been dying to come back over to my house to play again, which I’m super excited about! I failed to get any photos at all of the friend’s dinner because I was too busy enjoying it. Whoops!

Saturday I got the antiquing done on the headboard, then applied two coats of polycrylic to seal it, and it was done and ready for the bedframe and mattress. This I do have a picture of and will post below. After that Michael had me come to a graduation party to meet his parents, who then invited us over to their house for a while. I really loved meeting both of them! His mom is very talkative, just like he is, and I enjoyed chatting with her and learning a little more about Michael from her perspective. His dad is a big reader like me, so I got to talk books with him…and if you don’t know this about me, talking literature is one of my absolute favorite things and I rarely find anyone I can talk books with, so that definitely made my day!

Sunday was Mother’s Day, and the day I got my new bed! We started out first thing in the morning with a happy surprise — Michael was sneaky and got the boys a little something to give me for Mother’s Day. It was a framed picture of them that said, “to the world you are a mother, but to us you are the world.” And there was an Almond Joy in the bag with it — my favorite candy. It was such a sweet way to start my Mother’s Day and it made me tear up a little. Then we went to church, had breakfast with my grandparents, and they brought the bed down in their truck.

I got the bed all set up, then the boys and I went to the family dinner at Michael’s parents’ house with him and his son that evening. I had met his parents and a couple of his siblings, but this was the first time I would meet all of them (except a couple who don’t live locally) together, as well as the first time my boys would meet everyone. It went really well, and my older boys did a great job entertaining the two younger kids. Afterwards I got a back rub, a foot rub, a glass of wine and some Gilmore Girls, compliments of my really thoughtful boyfriend, who I couldn’t possibly appreciate more for helping to make my mom’s day one of the best I can remember!

Now that you’re all up-to-date on what I’ve been doing, it’s time to share my gardening adventures! A couple of weeks ago I got a raised bed kit, so I spent some time on the last Sunday of April putting it together, filling it with soil, and planting three tomato plants. I couldn’t find any Brandywine tomato plants at the local Lowe’s garden center, so I picked up an Early Girl, a Big Boy and a Roma plant. I also sowed the first round of green beans that day, as well as the zucchini, pie pumpkins and watermelons.

The garden center also didn’t have any zucchini plants (I’m not sure why things were so scarce there this year), so I went ahead and picked up a packet of seed and put them in a hill at the center of the first raised bed. I put the watermelon and pumpkin seeds in the big pots that I used for the tomatoes last year, and picked up two bell pepper plants and a jalapeno plant for the smaller pots. Then I did something that always makes for a good laugh when people come over and see it — I stuck plastic forks tine-end-up around all of the seeds I planted. Squirrels love digging in the fresh dirt, and I had a battle with them last year digging up every seed I sowed. I found the fork idea on Pinterest, and it works like a charm!

I also bought some Marigolds and Geraniums to help with pest control, some Dusty Miller’s for a little fun color and texture, some Pansies for a hanging basket, some Gerbera Daisies and Dahlia’s for the pots on the retaining wall, and some herbs: Basil, Cilantro and Parsley, which are annuals and need replanted each year, as well as a new Rosemary plant because the one I had didn’t come back (here in zone 6, that plant is iffy). The Oregano, Thyme, Chives, Sage and Mint are all back and thriving, plus I started another patch of Basil, and some Dill and Parsley, from seed.

The first round of green beans shot up extremely fast. You’ll see in photos below that in just a couple of weeks they’re already reaching maturity. I just sowed the second round of seed on Monday, so they’ll be about two-to-three weeks behind and will help stagger bean production so I’m not flooded with them all at once. The peas are finally up tall enough that I needed to run some twine between the trellises to assist their climb. It shouldn’t be too much longer and I’ll start seeing some blooms on them.

I also harvested the radishes this week! The beets, carrots and greens are still a long way from being ready, but the radishes really thrived in my slightly shaded garden bed. The lettuce is coming in thick as well, and the arugula sprouts in my pot are also filling in nicely. The icing on my garden cake is that I finally found my Brandywine tomatoes! They came in a six-pack, so I gave away the other five plants since I only needed one. It’s also smaller than the other three tomatoes I have out so it’ll take longer to produce, but I’m just really happy to have a plant because those tomatoes are my favorite!

Now that I have you up-to-date on everything that is out in my garden, I’ll share a few collages of my garden goodies (I wanted to do a slideshow, but WordPress didn’t seem to like it with 14 photos):

From left to right, top to bottom: Carrots, Lettuce, Arugula, Radishes, and the retaining wall with Gerbera Daisies, Dahlias, Chives, Thyme and Oregano. 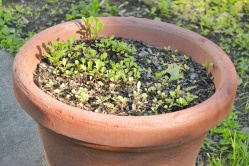 From left to right, top to bottom: Tomatoes in the raised bed, the Peppers, Watermelon and Pumpkins in pots, the Peas, Cauliflower and Zucchini in the other raised bed, Green Beans, and a Watermelon sprout. 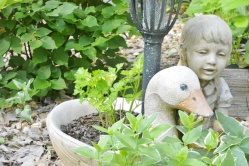 The last step will be getting an enclosure over my tomato bed so the squirrels can’t steal all of my tomatoes this year, and everything will be set for the summer. Cheers to my fellow gardeners, and may our gardening season begin!