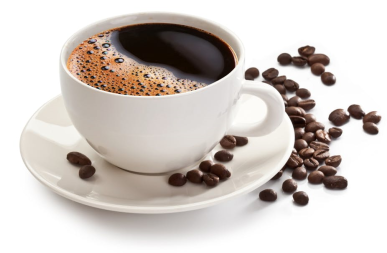 I’m six days in to a month-long experiment to see how much my diet effects my sleep and my mood. This is part of an overall quest to see if my thyroid (I have a nodule on it) is effecting my sleep patterns, if my sleep troubles are effecting my thyroid, or if diet could be effecting both of these things. This journey has already led me to an interesting finding about the role of caffeine in both our physical and mental health.

In an interview with Jeanne Schumaker from the YouTube channel Simply Plant Based, Dr. Neal Barnard said that even one cup of coffee in the morning can affect sleep that night. I was mind blown by this, because I have struggled with sleep for as long as I can remember. In fact, I count myself lucky if I get more than three nights in a row of good sleep.

I’m a coffee drinker, but not a heavy coffee drinker. I have one cup (a big cup, around 12 ounces) every morning, and seldom have any more coffee the rest of the day. I assumed this was out of my system long before bedtime, but now I wondered – could this really be effecting my sleep at night?

I watched this interview just one day after deciding to conduct an experiment on my own habits. I keep a bullet journal and track my mood, sleep and diet patterns. I also have a nodule on my thyroid glad. After doing a little research on thyroid function, I learned that my thyroid could be effecting my sleep, my sleep could be effecting my thyroid, and my diet could be effecting either one. So basically, there’s a big loop and I have no idea which issue is causing which of the other issues. If I can pinpoint it, maybe I can, at long last, get my biggest issue under control – sleep!

I decided to take my data since January 1st and chart them, to see if there is a pattern. It looks like my mood could be pretty related to the amount of sleep I get. But diet is less clear. Sometimes it seems to be on trend with my mood and sleep patterns, but other times it doesn’t. Since, of all of these variables, diet is the one I can have complete control over, I decided to make diet the control in my experiment, so that particular variable will remain unchanged. Then, I can chart and see how my mood and sleep patterns respond. If they look just like they always have, then I will know that I can rule out diet.

So, for the month of March, I am going 100% plant based (normally I allow myself 5% of my calorie intake to come from animal based sources, or about three servings per week). I’m also not consuming any added sugars, oils, or…caffeine. Caffeine was not initially on the chopping block since I thought my one cup a morning wasn’t hurting anything, but after hearing Dr. Barnard I decided the caffeine needed to go too, if I’m going to really have a controlled diet this month.

I’m at the end of my second day caffeine-free, and I’m surprised at the differences already. I did not expect to have withdrawal symptoms, but I did. I had brain fog starting fairly early in my day yesterday. My concentration was awful…I had to write so many things down, and during conversations, if there was any sort of disruption, I couldn’t remember where we’d left off. By lunch time I’d developed a headache, and by yesterday evening I was pretty fatigued and ready for bed by 7pm (I still stayed up until 9).

This morning I had more brain fog early on, but it dissipated quickly and stayed away until the afternoon. My concentration wasn’t back to normal, but it was greatly improved from the day before. I also had no headache today, and while I’m feeling a little drowsy this evening, I’m not fatigued. So I would say it’s looking up.

For a positive change that I didn’t expect – I have no anxiety at all. That jittery, butterfly feeling I get in my stomach when I have a lot on my plate, hasn’t been there. I’ve been surprisingly calm and relaxed, in a way that I didn’t recognize because it happens so infrequently. I didn’t think much of it yesterday, since on day one it could easily be a fluke. But now, at the end of day two, I’m still experiencing the same thing. Two days without coffee; two days without anxiety. I had to know if this was a coincidence, so I did a little searching.

Just type “coffee and anxiety” into your search engine and it’s incredible how many hits come up. This is apparently a “thing” and I never knew it. If you’re prone to anxiety, coffee can make it worse by accelerating heart rate, stress hormone production, and the “fight or flight” response.

Multiple sources said the same thing – caffeine can increase feelings of anxiety. One study said explicitly that caffeine exacerbates anxiety and sleep disorders. It also went on to show that psychiatric in-patients have increased anxiety, hostility and psychotic symptoms when given caffeine. The abstract of this study suggests that psychiatrists should be inquiring about caffeine intake during their routine assessments.

Another study, which overall found good things about caffeine, concurred that people given large amounts of the stimulant or who have disorders such as anxiety, can have impaired sleep and increased anxiety. The study I found most interesting tested the effects of caffeine on stress. It showed that, even at rest, caffeine increased heart rate and production of epinephrine and cortisol, two primary stress hormones. In this study, it was not heavy coffee drinkers or those with anxiety disorders, but on average men drinking moderate-to-light amounts of coffee.

What really got me about the withdrawal is how much this substance has hijacked my body without my even realizing it. Quitting coffee was meant to be temporary, but now I don’t know if I want to go back to it. I don’t want to ever be dependent on an external substance to feel good or be happy. I always thought that meant things like alcohol, tobacco, sugar…anything we tend to get addicted to. Because I don’t want to depend on a substance to feel whole; I want to be my true, authentic self, unobstructed by external factors. I never thought coffee would be one of those substances, but if it’s causing anxiety and preventing me from sleeping, which in turn effects my mood and energy for an entire day…then it will have to go!

I started this experiment hoping to finally figure out what is causing my poor sleep health, and I’ve already learned something I never could have imagined – that coffee drinking, even my one cup per day, could be causing both my sleep troubles and anxious feelings. I still have three-and-a-half weeks to go before the conclusion, but once that time is up I will know more, and have a decision made, that I will be back here to share.

4 thoughts on “The Anxiety Epidemic – Could Caffeine be a Cause?”