I got to do something this week that I’ve always wanted to do–a cooking class! A few weeks ago I met some friends for after work drinks down the block at Codefi, and then we ventured down to Gabriel’s afterwards for dinner. While we were there we discussed doing a cooking class, and three of us signed up for this past Tuesday’s class.

Gabriel’s is an authentic Italian restaurant in downtown Cape Girardeau, with the most amazing food and atmosphere. He offers cooking classes where you get to learn how to make delicious Italian food while drinking wine and snacking on fresh baked bread, meats and cheeses while cooking. In this class we learned how to make pasta dough from scratch, which became spinach and ricotta ravioli with a mushroom cream sauce.

Now that we know how to make good homemade pasta, I’m ready to go out and buy a pasta maker to roll and cut the dough, and some pasta molds. And then we have to host a friends’ dinner! You really can’t get the same thing from the store bought stuff, and it’s shockingly easy to make. Once the ravioli was filled, sealed, and formed…it took about two minutes in boiling water to cook, before transferring it into the sauce to finish it off. 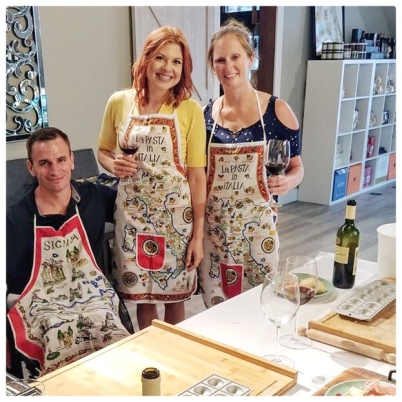 We were at one long table with 16 other people, and we made friends with the couple sitting across from us. Jenny and I both have gardens out this year and have discussed the thieving squirrel phenomenon that we’ve both been dealing with. The lady sitting across from us, a fellow redhead like myself who we affectionately called Ginger Spice after she told us that when her stepdaughter first met her, she thought she was Ginger Spice, started talking about her garden too.

She has 20 tomato plants out this year–20! And the squirrels have stolen every single tomato from her plants. She said that she has never had this happen before. For whatever reason, they are exceptionally bad this year. I’m not sure if it’s the heat, or if their usual food sources have been depleted due to the weird weather patterns. Whatever the reason may be–they’re raiding everyone’s tomatoes!

I did something I thought I would never do–I threw in the towel. I gave up. I was going to trap the couple of squirrels that have been hanging out in my back yard. I borrowed my grandpa’s traps, put some corn in them for bait, and set them up in my back yard. And it backfired! Sure, I trapped both of the squirrels…but I also attracted half a dozen more with the corn! I looked outside to find both traps with an occupant, and 3-4 more squirrels on the outside trying to get in.

My efforts were futile. I will never be able to capture and relocate that many squirrels, especially when I only have the weekends free to deal with it. So I freed the trapped squirrels, packed up the traps, removed the bird netting from my plants, and said screw it. The squirrels can have them. I’m done fighting it. I thought about buying some chicken wire and making cages to surround the tomato plants, but it’s already mid-July and I currently have zero tomatoes on my plants, not even any baby green ones. By this point, it’s no longer worth the effort.

So next year, I’m going to either do a raised bed enclosed in chicken wire, or I will build chicken wire cages then to put around my container tomatoes. I can report that growing them in pots did have promising results. The blooms and green tomatoes have been plentiful. I just haven’t had the opportunity to bring any to full maturity before they were taken from the vines by a thief in the night…or middle of the day!

It has been a very frustrating gardening year for me this year. The container potatoes I thought would do so well? I dumped the large container and barely had any potatoes. A handful of very small potatoes was it. The green beans are producing, but not very much. I got some lettuce, but not until the end of June. The radishes never formed. My carrots didn’t get more than a couple of inches long. The kale leaves never grew past “baby” stage. And the beets are nothing more than skinny purple roots.

I’m afraid the writing is on the wall…my yard is too shaded. I have a friend who is going to come remove the crabapple tree, so I may get lucky and have a decent crop of fall vegetables in a couple of months. The place in my landscaping where I have the pots of peppers and tomatoes seems to be the only place in my yard where I have any success growing vegetables. And as a lifelong gardener, it is a little heartbreaking that I haven’t been able to grow a successful crop.

Even the watermelon and pumpkin plants I have above the retaining wall are mostly in the shade by early afternoon because of the large trees in my neighbors’ yards, so they aren’t growing much either. By this point the vines should be several feet long and have small watermelons and pumpkins forming. At the rate it’s going, though, I won’t have any fruit before December!

Not all is lost though! I bought several plants for my bee and butterfly garden during the Fourth of July sale at Menards. I’m keeping them nice and healthy in their pots, and will plant them in late August when the hot summer weather starts to wind down and I can transplant them without worry of the high heat killing them. My strawberries are going crazy shooting out runners, and my herbs have all but taken over. I may be resigned to getting all of my vegetables from the farmer’s market, but I at least have fresh herbs to cook them with!

I also need to get moving on my herb drying rack project, because the time to dry and store them is quickly approaching. The only thing that has kept me from getting it done is that I don’t have a saw and need to borrow my dad’s, but he lives 30 miles north and I just haven’t gotten around to doing it yet. If there’s one thing I’m basically a master at, it’s procrastinating. It’s a good thing that I work well under pressure!

Case in point – I finally finished painting my living room last weekend. I started this project back in February when both of my sons were home sick with the flu. I didn’t touch it again until last weekend, five months later. And the hallway still isn’t done. If I stick to my prior schedule, then I’m right on track to have it done by Christmas. This is why when I set goals for myself, I write out a specific task list and a schedule to adhere to. If I don’t, it’s not getting done until I “have time”!

Speaking of time – I have plans for the evening that I need to get to, so I have to wrap up this update here. I hope your gardens and lives are all growing well. Until next time…