Being a mom is weird. It plays tricks on you. It is stressful, frustrating, complicated, even infuriating. It is also rewarding, joyful, fulfilling and enlightening. It can have you pulling your hair out, losing your ever-loving mind and begging for a break from your life one minute, and filled with love and happiness the next. Some days you can experience all of these things at the exact same moment.

My boys are gone to their dad’s now or the summer, home only every other weekend. On Monday, they had their last half-day of school. It was a busy day filled with anticipation. I went to the awards assembly at Logan’s school that morning to see him receive his student of the month award, and then went back to pick up his brother and him at noon so we could fulfill our annual tradition of having sushi on the last day of school.

We went to Midori and pigged out on sushi, went to Aldi so I could stock up on groceries that I wanted for meals that don’t have to please the kids, and then went home for our last hour of time together before they left to start their summer vacation. When we got home, Logan made for the bathroom, Hunter turned on the Xbox, and I started putting groceries away. We’d been home for about 10 minutes when the doorbell rang and Ruby went through her usual psycho dog routine.

I called to Hunter that whoever it is, they can’t stay because we’re leaving, assuming it was a neighborhood kid. Hunter looked out the window and said, “it’s not for me, there’s a bunch of grown ups out there.” Shit! I’d completely forgotten that the middle school teachers drive around to the houses of each student of the month to put signs in their front yards and take pictures with them. I yelled at Logan to get his butt out of the bathroom as I rushed to the front door. I pushed Ruby back from the door, opened it just enough to squeeze through, then pulled it shut behind me before she could spill out onto the porch in a furry, frenzied, yapping heap.

I had a yard full of teachers looking for Logan and being met, instead, by me. I sheepishly told them it would be one second because Logan was in the bathroom. They burst out laughing at their timing, and one of his teachers jokingly said, “tell him to cut it off!” My friend Ashley, who was Logan’s teacher this year, had text me that they were heading my way, but I’d been busy putting groceries away and hadn’t even heard my phone go off. We were woefully unprepared!

Logan finally made his way outside, his pink polo shirt and neon pink hair brightly reflecting the sun, to get his picture taken with his teachers standing around the sign they’d placed in our yard. Mrs. Doran said she had to wear her pink shirt just for him, causing a blush that nearly matched his hair. My boys have been talking all year about dying their hair funky colors. So for the last day of school I bought colored hair spray and let Hunter color his hair bright green, and Logan neon pink. How cool is it that they go to a school where their individuality and self-expression is celebrated by the staff?!

The teachers all raced off as quickly as they’d arrived, diving into vans and SUV’s to go celebrate the next student, and Logan and I went back inside–me to finish putting away groceries and him to pack up the things he was taking with him for the summer. I changed my clothes, loaded the boys’ things into the trunk, and headed out for the two hour trek to meet their stepmom, with a quick stop at my grandparents’ house on the way so they could say their goodbyes.

I’d been thinking for weeks about what I would do with my much-needed downtime. I deep cleaned my car inside and out, washed all the laundry, dusted and polished furniture, and scrubbed counters in the kitchen and bathroom, wanting everything clean and ready to be enjoyed since with only me at home it would actually stay clean and I could be free to do other things. Like read and binge-watch the shows I haven’t had time for. Cook all of the foods that I love that my oldest child won’t eat. Lounge in the living room in my underwear. Go out for dinner and drinks with friends. Live a completely chill and relaxed life for the next 12 weeks.

But now the day had arrived. The time was here for them to go, and it felt like I was living in a daydream. I knew the time had come, and yet my mind couldn’t quite grasp what was happening. They were leaving, but it still felt like I was going to drive right back home, we were all going to go to bed that night, and I would be waking them up at 6:15 in the morning to head out for another day of school and work. Like them leaving was nothing more than the drive to get there, and the trip would end with us all right back home where we’d started.

That isn’t how it happened, though. A few minutes before 7:00, I turned the corner onto my street and was overcome by an unfamiliar, confusing feeling. This was it. I was driving up my street, getting ready to begin my first free evening of the summer, what I’d been anticipating–practically begging for–all month. Time to myself. Time to unwind. Time to recuperate after a crazy last few months. Time for the world to stop spinning in a dusty swirl around me and let me catch my breath. But now that it was here, I didn’t want it. 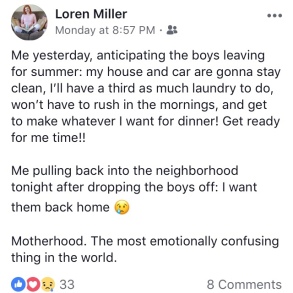 All I could think as I rounded the bend, less than a block from my driveway, was that I wanted the boys to be pulling into the driveway with me. I wanted them to get out of the car and burst through the door, dropping dirt and belongings and noise in a trail behind them. Instead I walked through the door by myself, the only sound that of Ruby’s barking demands to be let inside. The house was dark, and once I let Ruby in through the back door, it was quiet. I sat my purse in its place on the living room desk and dropped my keys inside, an empty feeling settling into the pit of my stomach as the stillness of the room permeated around me.

I showered and got my clothes out for the next day, then settled into the chair in the living room–the one usually taken over by Hunter playing games on the Xbox–with two hours before bedtime that would not be interrupted by the boys’ showers and bedtime routine. It was strange and confusing, and it was tough to concentrate on the TV despite the silence and absence of distractions throughout the house.

At 9:30 I turned off the TV and went to bed, where I tossed and turned for an hour before falling asleep, then woke half an hour before time to get up the next morning. I spent Tuesday, the first day of my summer, tired and devoid of energy…not exactly what I’d anticipated the start of my summer to be like.

But that same evening, I had my first outing–a barbecue for a friend’s birthday with his family and some of our friends. I got home from work, changed my clothes, dusted a fresh coat of powder onto my face, grabbed my lemony, summery beer, and made way to the barbecue. That evening catapulted me forward into the new customs of my summertime life. When I got back home around 9 that night, the house didn’t seem so eerily quiet anymore.

I took a shower, then Hunter called and I talked to him and Logan until it was time for me to go to bed. My emotions seemed to finally understand that the boys were gone, and that empty feeling gave way to acceptance. I slept well that night, and I woke the next morning ready for whatever the summer might bring my way.