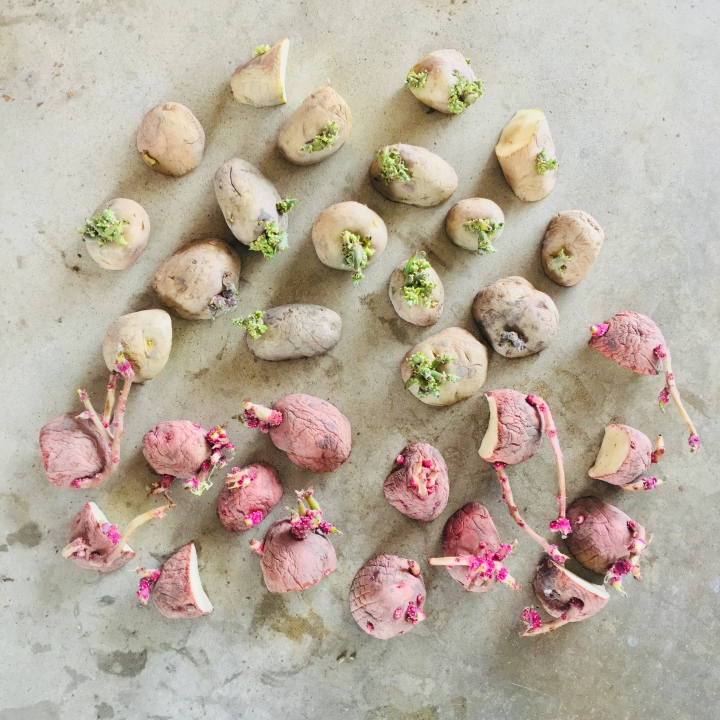 Here we are in the middle of April in Southeast Missouri, and it’s high time to get my potatoes planted and start the first row of green beans. But guess what? After a few days in the 60’s and even low 70’s…today’s high is supposed to be 47 degrees again!! Which means overnight lows right around freezing for the next two nights. Show of hands – who else is ready for Spring to come to stay?!

It looks like I will have to re-sow my carrots, because I have nary a sprout an entire month after sowing the seeds. But the good news is – my peas are up, and my onions and garlic have survived! There really is nothing worse for growing than snow and hard freezes after you have your plots planted, so I’m really glad that my only loss so far seems to be the carrots, which I’ll just re-sow and plan on a late harvest.

I was planning to get my lettuce, spinach, kale, radishes and beets all sown this past week since the initial forecast after last weekend’s winter weather was all 60’s, but by Thursday, my 70 degree planting day, the forecast for today was looking bleak. So now it’s been postponed until Tuesday…and I’m hoping and praying that there are NO MORE HIGHS IN THE 40’S after today!

Initially potatoes and green beans weren’t in my plans, because it didn’t seem realistic to grow these in containers. But then I took a page from my boys’ book and started trolling YouTube for container gardening tips and tricks. That was when I stumbled across some urban gardening channels that grow all of their potatoes in containers!

Borrowing from their expertise, I decided to take this up for myself. My grandparents’ home was destroyed by a tornado on February 28, 2017 (don’t worry, they came through it without a scratch and are re-settled now), and they ended up with an endless supply of plastic storage totes in the cleanup process that are now just sitting empty in their shed. So I took a large one and a medium one for the potatoes, and another large one for the green beans. Since it’s just me at home in the summer (my boys spend their summer at their dad’s and are only at my house every other weekend), I don’t need a whole lot and hope that these three containers will be plenty. If all goes well, I may double it next year and do some preserving.

So, without further ado, let me share with you my potato and green bean container gardening!

Potatoes in a Container: 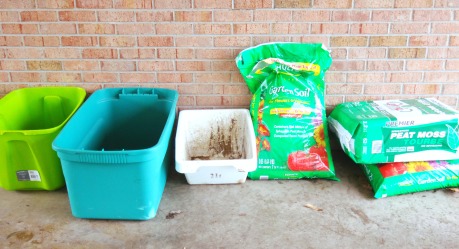 1. The first step is to make a 50/50 mixture of peat moss and garden soil (a garden soil made specifically for vegetables). If you’re an organic gardener, you can just buy organic soil and peat moss. If you do composting (this is something on my to-try list, so please share some tips if you do composting!), definitely mix some of that in as well. 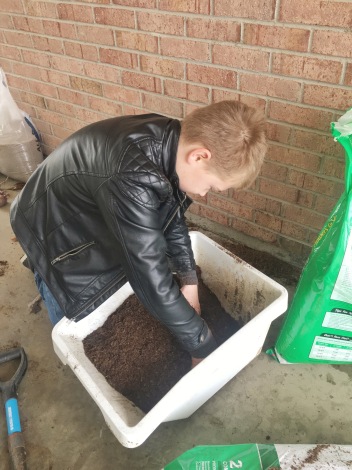 2. Before putting anything into the plastic container, you want to drill some drainage holes. Make sure you use a drill bit that is big enough to allow water to pass through easily without plugging the holes with debris. I drilled several, because the last thing you want is rotten potatoes due to sopping soil. Then you’ll place a layer of rock in the bottom before you add soil to help with the draining. I just did a thin layer since I have so many holes in the bottom! You’ll add six inches of soil mixture over the rocks. My Logan loves to help with the gardening, so he was happy to tackle these step for me: 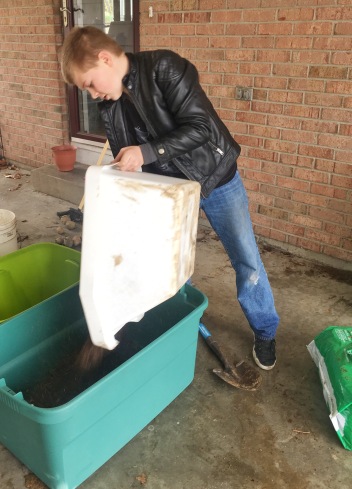 4. Once you have your soil in place, you’re ready to place your potatoes. I have both red and russet potatoes. The red potatoes were loaded in eyes that were already shooting out stems, so all I had to do was cut those into 2-3 pieces with at least one eye in each piece. The russet potatoes had eyes, but they were tiny and needed a little encouragement to grow and strengthen before planting, so I’ve had them lined up on my dining room windowsill to soak up the sun for the last 2-3 weeks. I cut all of my potatoes up with at least one eye per potato chunk, then placed them on top of the soil in the container a few inches apart. I ended up putting a few of the reds in with the russets, because with all of those eyes I had as many of those as the russet potatoes and they overflowed their smaller container!

5. Once all of the potatoes are placed, you’ll cover them with another three inches of the peat moss/garden soil mixture.

6. That is it for now! Just place the containers outdoors in the full sun and wait for the plants to grow.

7. Once the plants are up about 4-6 inches high, you’ll add more of the soil mixture, covering the leaves almost completely. Continue repeating this process as the plants grow, until they reach the top of the container. Then you can just let them go until it’s time to harvest. If all goes well, you’ll have an entire container completely FULL of potatoes!

Green Beans in a Container:

This process is a little more spontaneous, since this is just something I’m experimenting with myself and didn’t look up on YouTube, but you can definitely do a little research if you want to try it! I’m basically doing these just as I would if I were to sow them directly into the ground, except for one step – prepping the planting bed!

1. So for step one, you’ll drill holes in the container just as we did for the potatoes. The bottom of this container actually split while I was trying to drill a hole in the center, so I have one crack across the middle and decided that, with the holes at each corner, was enough. Again I added some rocks to the bottom to help with drainage. 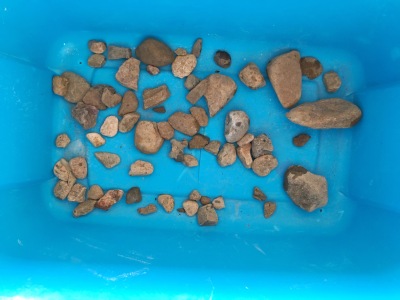 2. Fill the entire container with the same peat moss/garden soil mixture that we used for the potatoes. I filled it all the way to the top, because I know there will be some settling over time.

3. Then sow your seeds just as you would directly into the ground! I’m using the every-two-weeks method to sowing my seeds so that I’ll have a continuous supply of green beans. So for now I just put out one row. In two weeks I will put out a second row. Then in four weeks I will sow the last row. This way the bean production will be staggered and I won’t end up with an explosion of green beans all at once, and I will get fresh beans for a few weeks longer that way as well.

I think my favorite thing about doing green beans this way is that it’s harder for those pesky rabbits to nibble them off. Of course bunnies can hop, but having these plants a foot and a half off of the ground, with no room to really maneuver between plants and rows, should discourage their feast. My pup will also keep them at bay since she’s outside all day while I’m at work, and I won’t have to worry about her trampling the beans or chopping them off with her tie-out, either.

So that’s it! I gave them a light watering, then brought them inside today to protect them from the cold. I’ll set them in their permanent place in the back yard on Tuesday and give them a good soaking, then let the sunshine go to work!

In the meantime, I found a perfect little butcher block table for my kitchen, so I won’t have to build one! I also need to get to work on that herb drying rack. While I was out and about yesterday I picked up some pretty knobs, eye hooks, and twine. So now I just need to dig up some lumber from Grandpa’s farm shed and I’ll be ready to start crafting. Stay tuned for that DIY!

I hope you’ve had a fabulous weekend, and I wish all of you a fruitful growing season! 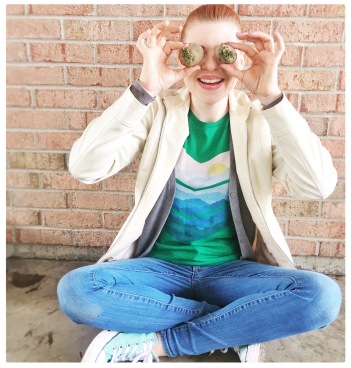